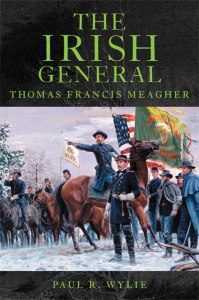 Irish patriot, Civil War general, frontier governor—Thomas Francis Meagher played key roles in three major historical arenas. Today he is hailed as a hero by some, condemned as a drunkard by others. Paul R. Wylie now offers a definitive biography of this nineteenth-century figure who has long remained an enigma.

The Irish General first recalls Meagher’s life from his boyhood and leadership of Young Ireland in the revolution of 1848, to his exile in Tasmania and escape to New York, where he found fame as an orator and as editor of the Irish News. He served in the Civil War—viewing the Union Army as training for a future Irish revolutionary force—and rose to the rank of brigadier general leading the famous Irish Brigade. Wylie traces Meagher’s military career in detail through the Seven Days battles, Antietam, Fredericksburg, and Chancellorsville.

Wylie then recounts Meagher’s final years as acting governor of Montana Territory, sorting historical truth from false claims made against him regarding the militia he formed to combat attacking American Indians, and plumbing the mystery surrounding his death.

Even as Meagher is lauded in most Irish histories, his statue in front of Montana’s capitol is viewed by some with contempt. The Irish General brings this multi-talented but seriously flawed individual to life, offering a balanced picture of the man and a captivating reading experience.

“Few men in the nineteenth century had careers as meteoric as Thomas F. Meagher’s. In this engaging biography, Paul R. Wylie chronicles Meagher’s colorful life. An Irish revolutionary exiled to Tasmania, he escaped to New York City, where he rose and fell as a leader of the Irish-American community.”
– James M. McPherson, author of the Pulitzer Prize winning Battle Cry of Freedom: The Civil War Era

“Wylie, a retired Montana attorney, covers the battles of the Irish Brigade in a clear, concise fashion.” “Wylie manages to sort through mounds of information from letters, diaries and contemporary newspaper accounts to present a balanced portrait of a complex and often contradictory life.”
– Gordon Berg, America’s Civil War, January 2008